Clarity refers to the surface imperfections (blemishes) and interior (inclusions) characteristics of a polished diamond. These imperfections and flaws are referred to jointly as the diamond's clarity.

The finest quality flawless diamond has the highest clarity ranking (FL), which means it has no apparent flaws or imperfections when examined under 10x magnification eyeglass. In fact, flawless diamonds are rare since most of natural diamonds have some degree of fault. Needless to say, the less clarity characteristics a diamond possesses, the rarer and more expensive it becomes.

Clarity is one of the 4Cs of Diamond which is used to estimate the beauty and worth of diamonds. Different grades of clarity will affect the pricing of a diamond.

These are referred to as "clarity features" or "inclusions" together. These not only help graders to distinguish between synthetic and natural diamonds, but they also allow the quality of a diamond to be evaluated.

These clarity features may or may not be seen to the human eye depending on their size, number, positioning, tone, or color. This is one of the reasons why a perfect diamond is so difficult to find.

Glorious Diamonds believe before you buy a valuable diamond, it is very important for us to explain Gia recommended all categorized inclusions. Here we will look at the many sorts of inclusions and how they affect the appearance of the diamond so that you can recognize and understand how these inclusions will change the visual appearance of a diamond.

Pinpoint is most accepted inclusion compared with other. A very small crystal that looks like a tiny dot at 10X. Pinpoints usually appear as white dots that look like pinpoints of light when viewed under 20x magnification glass. Some pinpoints also come in gray or black. They’re pretty difficult to locate, so you won’t see them often on the plotting diagram of a diamond grading report. Instead, you might see the remark “pinpoints not shown” in the comments. Pinpoint inclusion is known as a diamond-friendly and doesn’t have much effect on diamond clarity therefore Glorious Diamonds always suggest you to buy. We believe, choosing pinpoint is your triple excellent decision. Value your money & easy to resell. 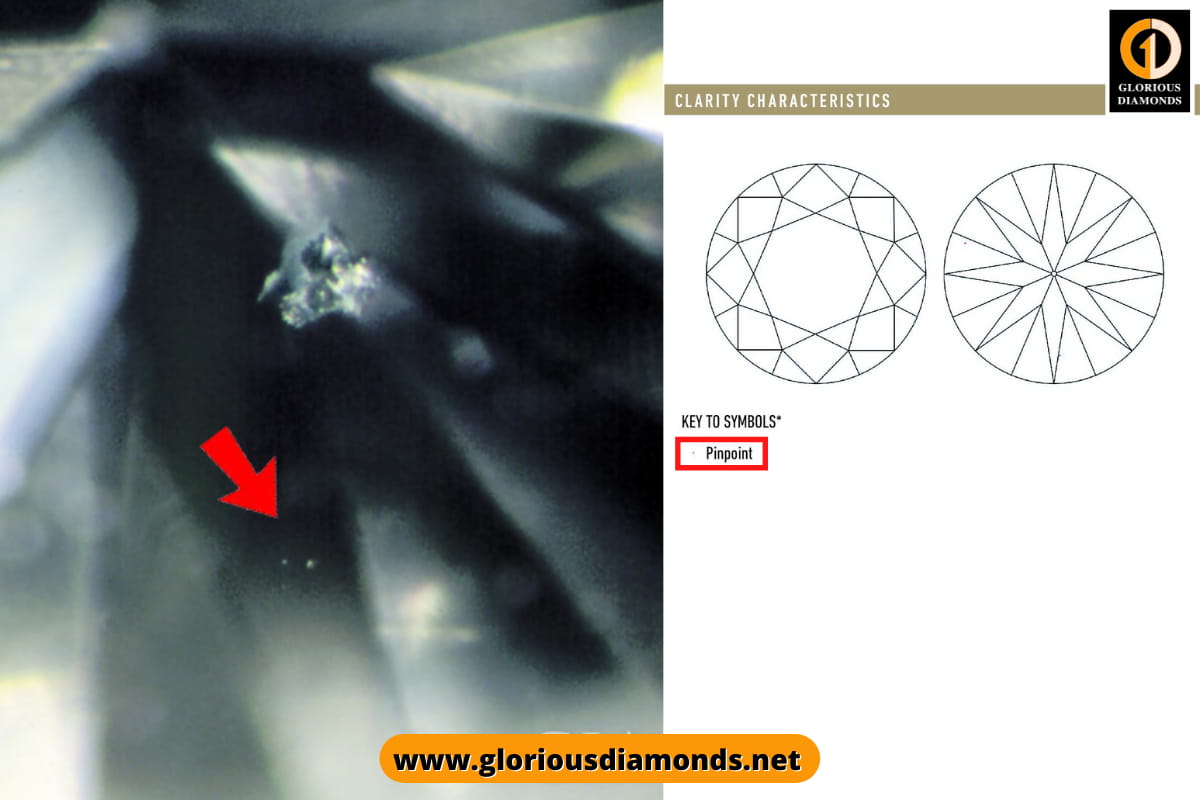 This is one of the most common sorts of diamond inclusions you'll come across while looking for your stone A thin, elongated crystal that looks like a tiny rod at 10X. When a crystal is formed under great pressure, it takes on the shape of a needle rather than the round.

A needle is a long thin crystal inclusion that is generally white or transparent, as its name indicates. Needle inclusions are difficult to identify with the naked eye, they are frequently observed under magnification. 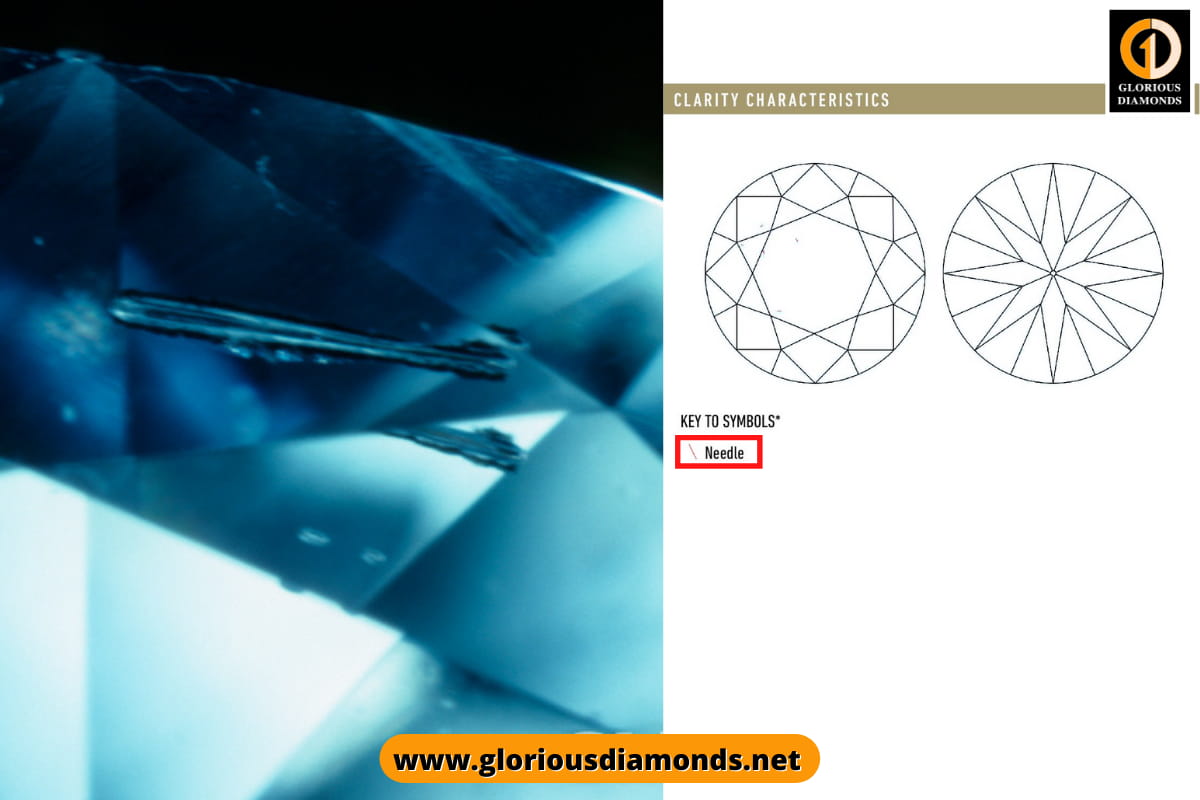 If you are making decision to buy indented natural diamond, Glorious Diamonds advise not to worry, it can be easily hidden under gold while setting.

Within the diamond, a feather is a tiny inclusion. When seen from an exact angle, a feather inclusion is an internal inclusion that seems to be a fracture with a feathery appearance. These are cracks inside the diamond that look like feathers. Feather inclusions, like other inclusions, can seem white or black. The size and location of the feather have an effect on how destructive it is to the diamond's beauty, luster & brilliance. Minor feathers below the surface usually do not create problems. Although, these inclusions are more frequently found, surrounding included-crystals.

If you ask me how obvious it is, I'd answer it depends on the angle at which we look at the diamond. The feather may be so transparent that it is imperceptible from some perspectives, but when light is reflected from another angle, it may seem as a white crack. A diamond you are choosing has too many "feathers, you may get higher discount. 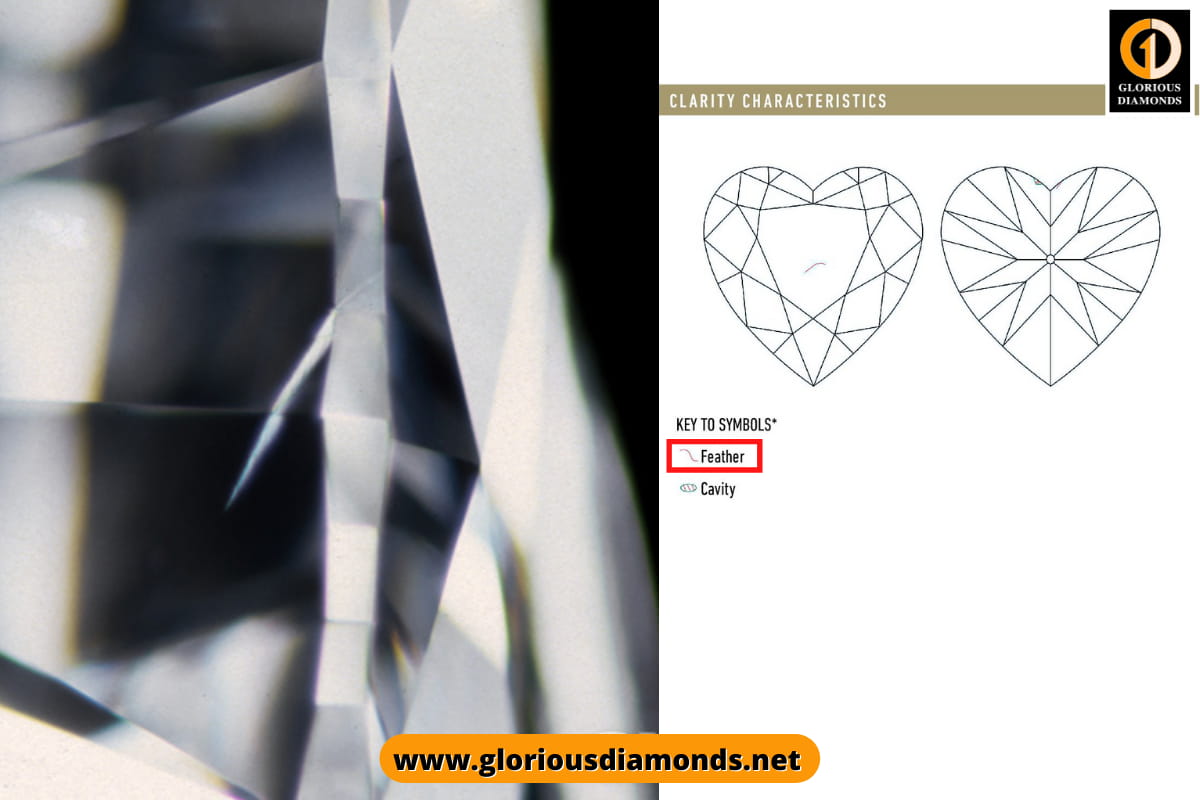 A mineral crystal contained in a diamond. A crystal inclusion is a natural crystal found within the diamond. They can be colorless, black, reddish, greenish and so on, depending on the type of material.

In a diamond clarity plot, the crystal inclusion appears as a plain red circle. It comes in a variety of forms and sizes. 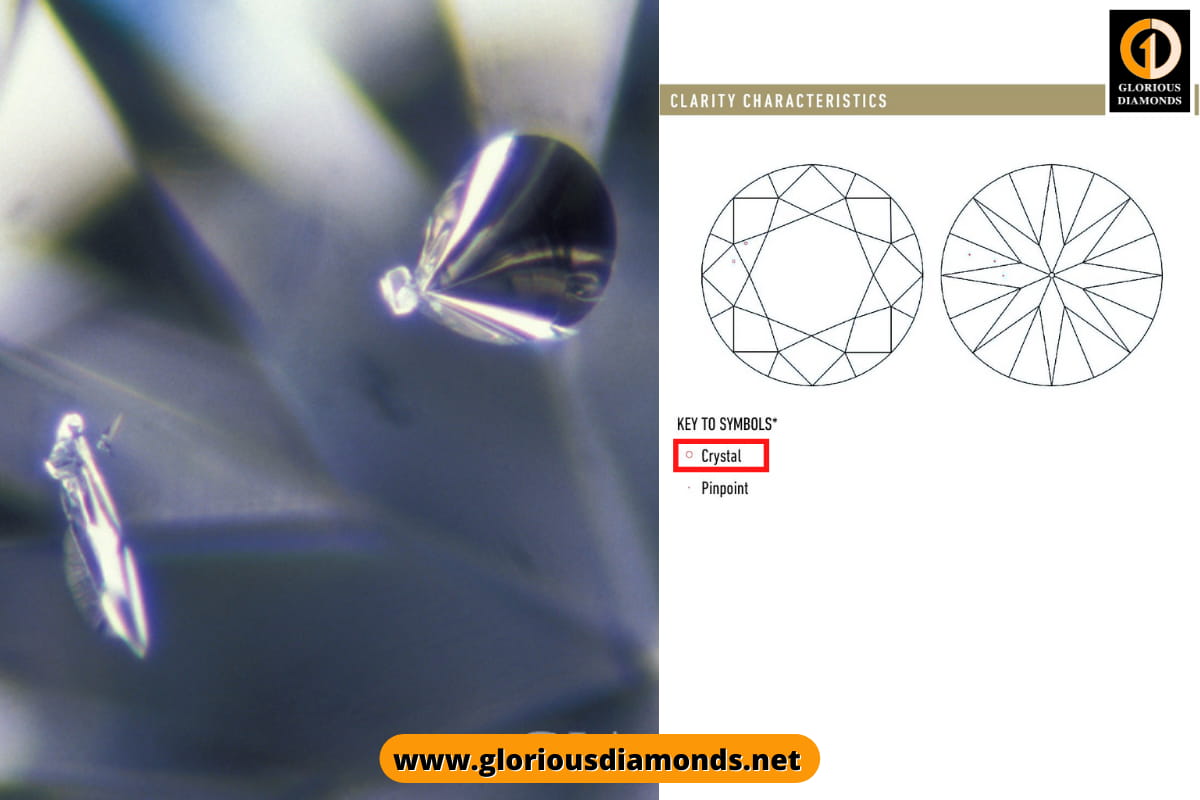 A cloud is actually just an area with microscopic inclusions within the diamond. The “cloud” is named by itself because of its white color and hazy appearance. Many tightly clustered pinpoints that might be too less to differentiate individually but together have a hazy appearance. However, in most cases, cloud inclusions will affect a very small part of the diamond, and will not have a larger effect on light performance than any other category of diamond inclusion such as a feather, crystal, grain line or twinning wisp.

A circle formed up of tiny red dots or pinpoints on the diamond grading report shows the presence of a cloud inclusion.

Diamond traders call this kind of diamond “Milky” Cloudy diamond is not always bad, depending on the severity of the cloudiness. If the cloudiness doesn't take up a large portion of the diamond, specifically on the table, then it can still be an attractive diamond. Too much cloudy or milky kill the luster, fire & beauty of diamond but on other hand, you can buy in heavy discounted price.

A chip is defined as a shallow opening on the external part of the diamond, mostly caused by damage to the diamond’s surface or an impact on a facet junction, girdle edge or culet. The main reasons of a chip are from careless wearing and usage of a diamond. It could be caused by a mistake of an inexpert diamond craftsman while cutting, setting or removing from jewelry. 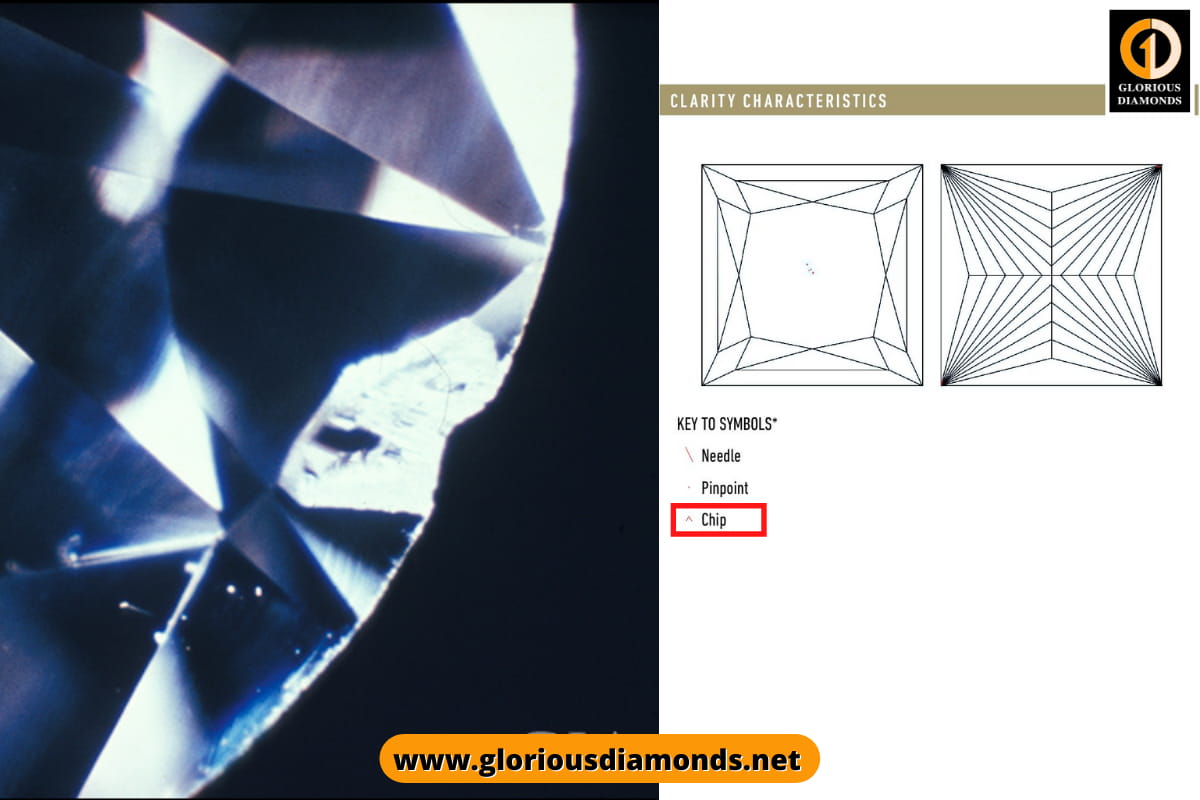 A large or deep opening in the diamond's surface is referred as a cavity inclusion. Cavities are usually formed during the polishing process when an inner inclusion is breached or dislodged from the diamond, resulting in a hole on the diamond's surface. It's a crack in the diamond that normally appears during the cutting process. The diamond craftsman tries to take out an inclusion such as a feather or a crystal, which causes a cavity. Glorious Diamonds advise to choose pinpoint, feather, needle rather than cavity. Minor cavity is better than heavy black crystal. 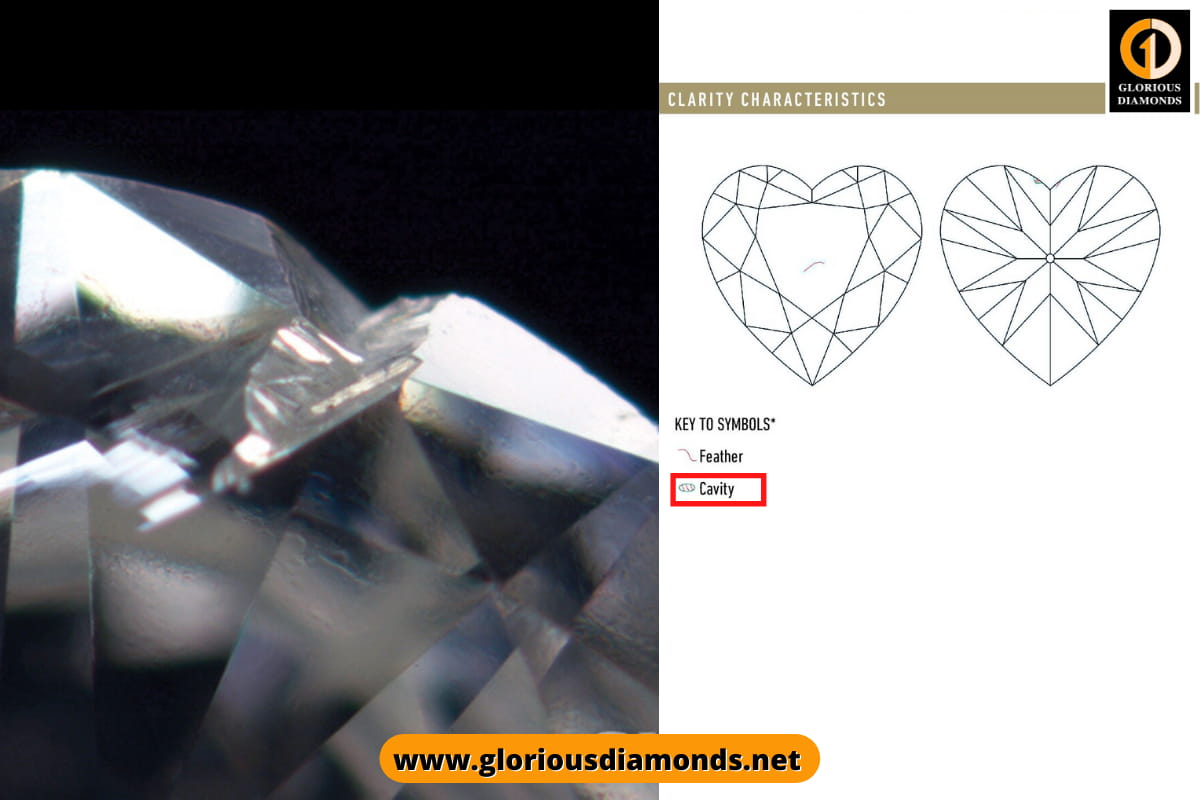 Diamonds with knot inclusions are generally specified a lower clarity grade since the defect is easy noticeable to the naked eye. A knot may weaken a diamond and put at risk its durability. 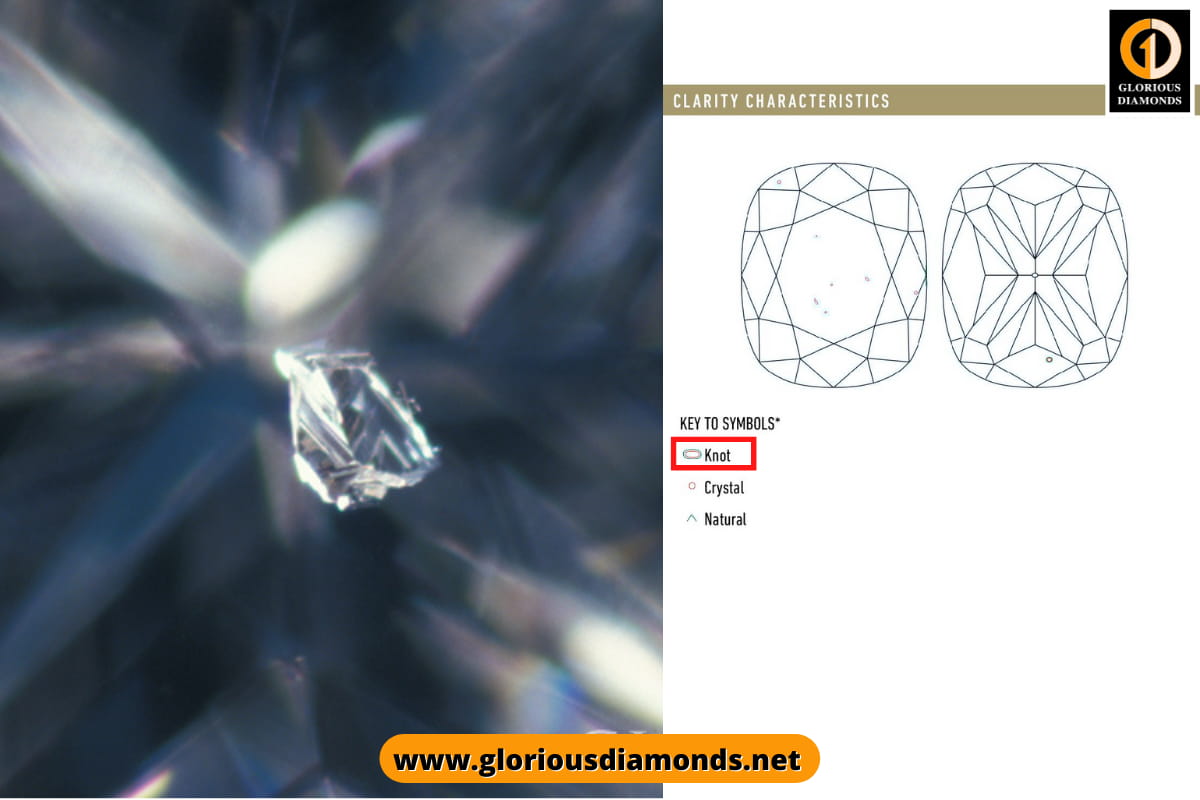 A diamond inclusion similarly small fractures or feathers at or close to the diamond's surface. A small part of diamond impact accompanied by very small, root-link feathers. These inclusions are more damaging to the diamond's value than white flaws. Despite this, white and black inclusions are frequently treated the same in a diamond grading report for clarity grading reasons.. 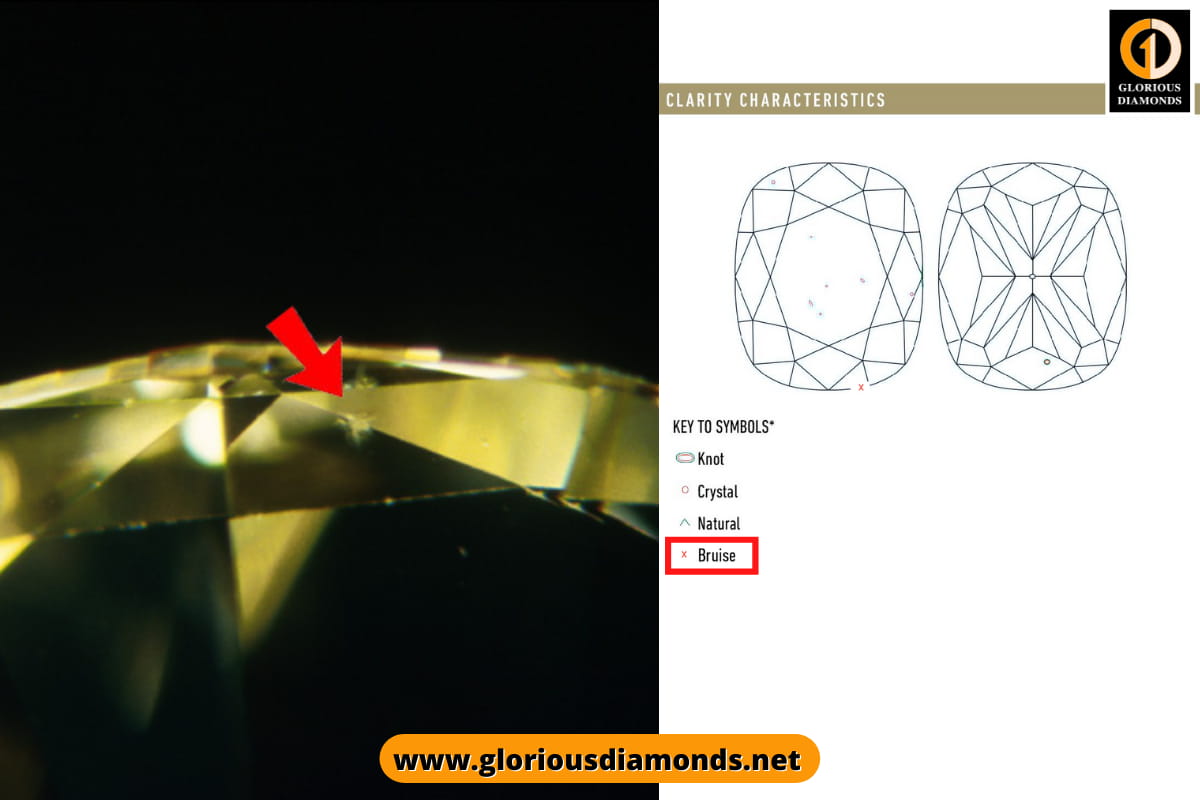 A tiny, surface-reaching tunnel produced by a laser light beam. The craftsman removes a black internal inclusion from a included diamond by drilling a small tunnel through it using a laser. The laser drill hole will be represented by a red point surrounded by a green circle in the clarity plot. If the drill hole in the diamond surface isn't visible, the diamond certificate comments section will say Internal laser drilling is present.

Twinning wisps are made up of a variation of inclusions, which mostly include clouds, crystals, and feathers. Twinning wisps can give the impression in a number of behaviors created on their make-up. They might be slight strips passing through the diamond or black and white stripes. They can be in brown and yellow colors in some conditions. These are crystalline inclusions, which means they are colorless; it is not easy for a diamond learner, and even experts, to see the inclusions in this particular diamond by naked eye. Colorless twinning wisps are typically visible at 10x magnification.

An etch channel is essentially a hollow tunnel that develops on the surface of a diamond and enters its body. The etch channel is similar to the laser drill hole. Its appearance can be comparable to inclusions created by an internal laser drilling treatment, but it can also take other shapes, such as parallel lines or irregular worm-like formations. Etch channels are formed as a result of the diamond's high pressure and heat in the earth. It can scar the diamond, resulting in etch channel inclusions. Etch channels don't affect the overall durability of the diamond but can affect overall diamond clarity, especially if these inclusions are located in the pavilion of a diamond.

An etch channel will be a red rectangle with a somewhat smaller green rectangle on a Gia grading report.

Buyer always confuse “extra facets” to be inclusions since they are generally found in the clarity plot diagram. Glorious Diamonds believe extra facet shouldn’t be considered as an inclusion because it is a symmetry flaw instead of a clarity characteristic. Extra facet is a flat, polished surface that can arise anyplace on the diamond. You can consider as a ‘rouge’ facet placement that deviates away from the diamond’s usual faceting pattern.

Mostly, extra facets are found nearby the girdle or the pavilion part. Additional facets are often used during diamond repairs or recut. For example, slight blemishes like nicks or chips caused by wear-and-tear could be just removed by polishing them away, resulting in the creation of a new facet at the damaged location called extra facets.

Lines, angles, or curves that might appear whitish, colored, or reflective, or affect transparency at 10X; caused by irregularities in crystal growth. Internal graining is a feature that is difficult to detect even under magnification. Internal graining exposure usually depends on the inspecting angles and lighting conditions.

A best clarity IF diamond can have internal graining and as long as it's crystal clear will not affect the diamond clarity grade. If the grain lines take on brown or a color that is different than the diamond it can down grade from IF to VVS1. So, this kind of inclusion if you want to call it that is a natural part of the crystal structure and it can be found easily in most of clarity grade. It can likewise be the reason for a diamond not getting the highest polish grade.

Gemologists use a 10x magnification eyeglass to examine for microscopic feather-like inclusions between the girdle and the facets to determine, if the diamond is bearded. Very small feathers that extend from the girdle surface into the stone, can result from the cutting process. These inclusions will look like to be migrating toward the diamond's center, giving the gemstone a beard-like appearance.

The grain center is a small, dense area of crystal growing deformation. It might be white or black, and it might appear thread-like or pinpoint-like. Grain center can be similar to translucent tornadoes trapped deep inside the stone. They can appear alone or in groups. They are invisible from all viewpoints, so they might disappear and reappear when you turn the diamond or move it from sid to sid.

Natural inclusions are reduced in visible by using laser drilling. Using a laser beam with a diameter of less than 0.02mm, a hole is drilled through the diamond to reach the inclusion. Laser drilling inside a diamond that makes a surface-reaching feather, or enlarges a pre-existing feather around a dark inclusion so that it reaches the surface. Carbon dioxide lasers are used to burn a minor unit of the stone till it disappears, making a pipe that leads to the inclusion. The feather then provides access for whitening to reduce the visibility of the inclusion.

“Glorious Diamonds” We are diamond factory & Diamond shop online , Our diamond jewelry from the best-cut sources, With a GIA quality guarantee.